Two World Travelers Bringing It All Back Home
By Jon Pareles [From the New York Times, October 1, 2000]

Sooner or later, most world travelers reach the same realization: you can’t leave yourself behind. In the most distant locales and unlikely situations, you still carry a lifetime of habits and memories. Yet with any luck, you’ll bring back something lasting: a new perspective on space and light, on how people interact and how ideas fit together.

Paul Simon and Youssou N’Dour, two songwriters with internationalist ears, have racked up ample mileage and countless collaborators over the last decades as they made their musical reflexes grapple with foreign stimuli. On their new albums, they’re back on home ground, but irrevocably changed. “If you don’t know where you’re heading anymore/ Go back to where you come from,” Mr. N’Dour sings (in the Senegalese language Wolof) on his new album, “Joko (The Link)” (Nonesuch 79617- 2). “Carry me home, my teacher, carry me home,” Mr. Simon sings on his new “You’re the One” (Warner Brothers 2-47844).

Each songwriter has taken up an old role, culturally ordained. Mr. Simon is the introspective loner, an American individualist trying to make sense of private lives and offering idiosyncratic observations, strictly personal. Mr. N’Dour, doing the traditional duty of a West African griot, makes himself the voice of a community: praising historical figures, counseling virtuous behavior. Yet both songwriters revitalize their accepted function with everything they’ve gleaned abroad.

“You’re the One” is Mr. Simon’s first album without a superstructure – just a batch of 11 new songs – since “The Rhythm of the Saints” in 1990. In between, he released a live album and “Songs From `The Capeman,’ ” his 1997 Broadway musical. “The Capeman” touched on crime, politics, ethnic tension and troubled nostalgia. After the globetrotting of “Graceland” in 1986 and “The Rhythm of the Saints,” its music returned to New York City circa 1959: doo- wop, Puerto Rican rhythms and pop.

On its surface, “You’re the One” seems to head back to the folky tunes and shaky love affairs of Mr. Simon’s 1970’s albums like “Still Crazy After All These Years” and “There Goes Rhymin’ Simon.” It’s full of translucent guitars and conversational vocals, and most of its songs are written from the point of view of someone who’s staying put, contemplating the evanescence of love and human folly.

By contrast, ” Graceland” and “The Rhythm of the Saints” were the memoirs of an unmoored, overstimulated traveler. The songs sought to make sense of the distance, and the closeness, between poverty and affluence, between tradition and technology, between the material and the spiritual. Both albums were about uncertain pilgrimages and stray epiphanies, described in the lyrics and embodied in musical hybrids.

Those hybrids peek through the songs on “You’re the One,” and they frequently take over. Arrangements that start out with modest fingerpicking, like “That’s Where I Belong,” suddenly take on a syncopated lilt and lift off. Bamboo flute, finger cymbals, cello or mbira (thumb piano) might turn up, as two percussionists send cross-rhythms flickering across and over the beat.

Mr. Simon knows so much music now that he rarely draws a song from just one idiom. While a vocal line may be symmetrical enough for a campfire sing-along, a different rhythmic slant or percussion accent sneaks in for a transcontinental second opinion. There are glimmers of country, Indian music, mariachi, Celtic slow airs, South African mbaqanga, bossa nova, reggae and Congolese soukous, and at least one gorgeous pop chorus: the one-word chorale of “Love,” a benediction before Mr. Simon starts thinking about genocide in the last verse.

The Cameroonian guitarist Vincent Nguini, who has been working with Mr. Simon since “The Rhythm of the Saints,” joins him through much of the album, and their guitars intertwine like trellised grapevines or DNA double helices. “Darling Lorraine” is a six-minute study of the ups and downs of a marriage; it’s also about shifting pulses and rhythm patterns, chords switching between minor and major, and the way a nearly inaudible shake of a maraca or tap of a cymbal can tease a tune forward.

In its own quiet way, “You’re the One” is a completely stubborn album. It’s oblivious to anything like pop fashion, relying on hand-played instruments and convoluted arrangements; its songs ease into odd meters like 11/4 (“The Teacher”), or move through ingenious, accelerating tempos like “Hurricane Eye.” Although “The Capeman,” in 1997, was a half-step ahead of the Latin pop resurgence, “You’re the One” doesn’t hint at salsa.

Where most pop and rock musicians cling to youth, Mr. Simon has always presented himself as prematurely mature. He sang “A Hazy Shade of Winter,” about missing “the springtime of my life,” when he was 26; in “Still Crazy After All These Years,” he acted middle-aged at 33. Now, the 58-year-old Mr. Simon mocks himself in “Old,” though he takes it back by comparing one life span to the venerability of the human race and the universe. Still, he allows himself a codger’s chutzpah; after singing about Christianity, Buddhism and Islam, he cackles: “Disagreements? Work ’em out.”

Mr. Simon may be singing about death in the album’s meditative final song, “Quiet,” when he intones, “I am heading for a time of quiet/ when my restlessness is past”; he may just be seeking calm. Even if he’s not headed out of town, his music remains mobile.

Mr. N’Dour has an eye on Senegal and an eye on the world throughout “Joko.” Where Mr. Simon allows himself the quirks of a private citizen, Mr. N’Dour makes his statements with the self-conscious care of a diplomat: Senegal’s ambassador to the world. “Drop your gun and go to school,” he sings, hoping to reach every urban child. He proudly harnesses the latest technology to unmistakably Senegalese music.

His band, Super Etoile, has no rival in the brisk Senegalese rock called mbalax, with jumpy six-beat rhythms and vocal lines that leap out of the off-beats. It turns mbalax inward in “Miss” and lets it gleefully race ahead in “Beykat,” a tribute to hard-working peasant farmers. But Mr. N’Dour also wields Western sounds. There are hip-hop drum loops, guitar power chords and brooding trip-hop synthesizers alongside the sputtering Senegalese tama drums and keyboards programmed to plink like a kora, the griot’s harp-guitar. Peter Gabriel wafts a ghostly backup vocal above the synthesized balafons (marimbas) of “This Dream”; while “Liggeey” urges everyone to work hard, talking drums chatter above a doo- wop chord progression.

“Birima,” a jubilant praise song to an ancient king, juxtaposes a stuttering traditionalist guitar with synthesizers. Then it turns into a three-chord rock anthem; an electric organ clinches a resemblance to Bob Dylan’s “Like a Rolling Stone.” And while drummers add a crackling cross-current, Mr. N’Dour’s voice – a searing combination of passion and gentleness – heads skyward with improvisations that laugh out loud. Until he reaches the album’s last two songs, which are geared to English-speaking listeners and verge on corniness, Mr. N’Dour presides over gleaming, intelligent, unabashedly global pop. He hasn’t decided to stay home; it’s just that he’s at home everywhere. 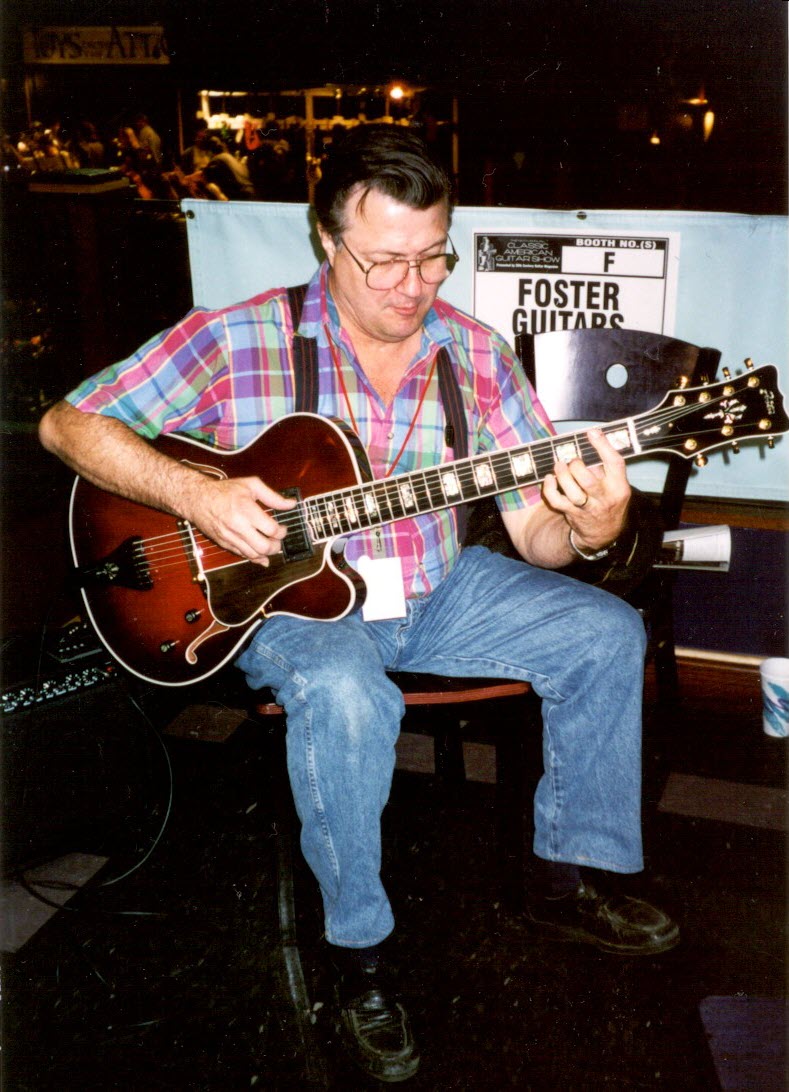 In Memory of Jimmy

*** All models available in 6-string or 7-string configuration

Ted Ludwig Interviews Jimmy Foster
From Sep. 2004: Made for Each Other
From NOLA.com Apr. 2011: Jimmy Foster
Foster Guitars on Facebook